The ABC of It: Things to Think About: Intellectual Freedom 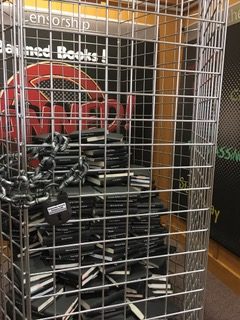 A stack of black books with in a metal cage, sign behind says Banned Books 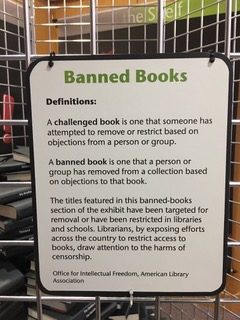 A sign defining “a challenged book” and “banned book”

What is a Banned Book?

A challenge is an attempt to remove or restrict materials, based upon the objections of a person or group. A banning is the removal of those materials. Challenges do not simply involve a person expressing a point of view; rather, they are an attempt to remove material from the curriculum or library, thereby restricting the access of others.

What is a Challenged Book?

A challenge is an attempt to remove or restrict materials, based upon the objections of a person or group 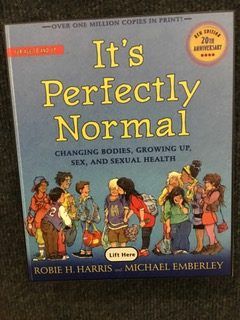 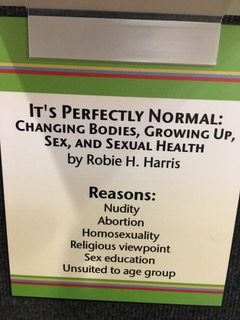 Under the Cover Flap of Perfectly Normal , Why people want it removed from the shelves

It’s Perfectly Normal, a sex education book for children, is one of the most banned books of the past two decades. The book is meant to teach children 10 and older about sexual health, emotional health and relationships, and contains sections on puberty, pregnancy and sexual orientation.

Things to Think About: Intellectual Freedom

What is intellectual freedom?

Intellectual freedom is the right of every individual to both seek and receive information from all points of view without restriction. It provides for free access to all expressions of ideas through which any and all sides of a question, cause, or movement may be explored.

These words and those below are from

Why is intellectual freedom important?

Intellectual freedom is the basis for our democratic system. We expect people to be self-governors, but to do so responsibly, our citizenry must be well-informed. Libraries provide the ideas and information, in a variety of formats, to allow people to inform themselves.

Censorship is the suppression of ideas and information that certain persons—individuals, groups, or government officials—find objectionable or dangerous. It is no more complicated than someone saying, “Don’t let anyone read this book, or buy that magazine, or view that film, because I object to it!” Censors try to impose their view of what is truthful and appropriate, or offensive and objectionable, on everyone else. Censors pressure public institutions, like libraries, to suppress and remove from public access information they judge inappropriate or dangerous, so that no one else has the chance to read or view the material and make up their own minds about it. 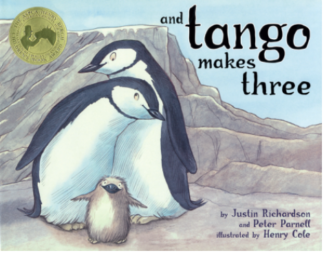 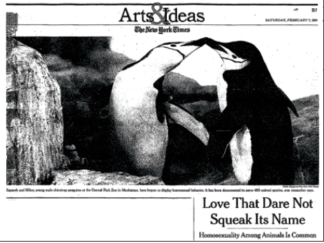 What is this book about? It is the true story of two male penguins in Central Park in NYC who raise a baby penguin.

Why would someone request  this book to be removed?

The ninth entry in the American Library Association’s 2017 list of the top ten challenged and banned books is no stranger to censorship. And Tango Makes Three has appeared on the list a whopping eight times—in 2017, 2014, 2012, 2010, 2009, 2008, 2007, and 2006—for challenges that mostly distill down to the book’s depiction of a same-sex relationship between penguins (“unsuited to age group,” “anti-family,” and the head-scratching accusation of being “anti-ethnic” have also popped up in challenges).

How does censorship happen?

Censorship occurs when expressive materials, like books, magazines, films and videos, or works of art, are removed or kept from public access. Individuals and pressure groups identify materials to which they object. Sometimes they succeed in pressuring schools not to use them, libraries not to shelve them, book and video stores not to carry them, publishers not to publish them, or art galleries not to display them. Censorship also occurs when access to materials is restricted to particular audiences, based on their age or other characteristics.

Under the First Amendment to the United States Constitution, each of us has the right to read, view, listen to, and disseminate constitutionally protected ideas, even if others find those ideas offensive.

Is there a relationship between censorship and intellectual freedom?

In expressing their opinions and concerns, would-be censors are exercising the same rights librarians seek to protect when they confront censorship. Their rights to voice opinions and try to persuade others to adopt those opinions is protected only if the rights of persons to express ideas with which they disagree are also protected.  What censors often don’t consider is that, if they succeed in suppressing the ideas they don’t like today, others may use that precedent to suppress the ideas they do like tomorrow.

If materials are on a library shelf, doesn’t that mean the library approves of those materials?

The presence of any particular materials in a library collection does not imply endorsement of the ideas expressed in those materials. The library is simply doing its job as a neutral provider of information from all points of view—if the library “endorses” anything, it is your right to have access to a broad selection of materials.