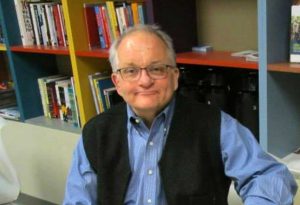 A fierce advocate for writers and readers, Paul Von Drasek, 71, died in his sleep of natural causes on May 16. He began his career in bookstores and then spent more than 30 years in sales for book publishers. He is survived by his wife, Lisa Von Drasek, Curator of the Children’s Literature Research Collections at the University of Minnesota Libraries.

Paul Von Drasek graduated from the University of Minnesota with a bachelor’s degree in Humanities and earned his master’s in Education at Minnesota State University, Mankato. He moved to New York City and worked at the Strand bookstore, then returned to Minnesota to work for B. Dalton Books, first in Edina and then opening a store in Alexandria. He worked next at the University of Wisconsin-Milwaukee Bookstore.

He was recruited to work in sales for book publishers and moved back to the East Coast. At Penguin Group USA, Von Drasek rose to national field sales manager. He continued in sales management at Houghton Mifflin, Little Brown, and Harcourt. When the two companies merged into Houghton Mifflin Harcourt in 2008, he became director of field sales-trade.

He then returned to Minnesota to work as trade sales manager at Capstone Publishers, based in Mankato, where he led an expansion through the creation of Capstone Young Readers. In his Publishers Weekly obituary, Capstone associate publisher Beth Brezenoff was quoted: “We are so grateful that Paul was part of our team for several years. He was a consummate book professional: engaging, curious, and most of all kind.”

In the obituary, HMH senior national accounts manager Mike Harrigan also remembered Von Drasek. He was “a patient teacher, always kind and always curious about how things could be done better. He taught me many of the fundamentals that I still use to this day at work. … He approached everyone with a smile and a story. Always ready to listen to a problem, tell a joke, dispense some trademark wisdom. No matter how grumpy or miserable you were, Paul always had something positive to say.”

Von Drasek met the woman who would become his wife while on a sales call to a bookstore in Philadelphia. During their time in New York City, he was in book sales management and also taught publishing at Columbia University.

Volunteering was important to Von Drasek. He was on the board for 14 years of Curbstone Press, a leading literary press that he helped to become an imprint of Northwestern University Press. A beloved fixture in the Twin Cities literary community, Von Drasek served on the board of Rain Taxiand was a huge fan of the Twin Cities Book Festival.

Eric Lorberer, editor-in-chief of Rain Taxi, which also produces the annual Twin Cities Book Festival, told Publishers Weekly that: “Paul Von Drasek was indefatigable in steering us through countless challenges the last several years, not the least of which was the pandemic upheaval of the past year — and he did so with an unflagging enthusiasm for the book world that inspired us to do our very best. We will miss Paul dearly.”

In the Twin Cities public schools, he facilitated young people’s writing and helped transform their first drafts into published books through the literacy program 826 MSP.

He was preceded in death by his parents, Dr. Joseph and Lois Von Drasek, his stepmother Laverne Von Drasek, and his brother David Von Drasek. Along with his wife, Lisa, he is survived by brothers Frederick and Joseph (Marty).

His funeral has been held; a Zoom memorial will be convened at a later date. People can remember Paul Von Drasek by supporting organizations that he cared deeply about: 826 MSP, Rain Taxi, and the Endowed Kerlan Chair Fund.