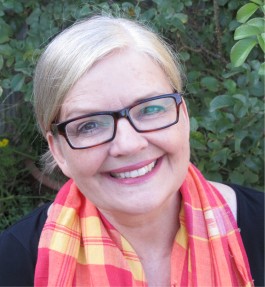 Antoinette made her picture-book debut with the New York Times best-selling Not A Box, an American Library Association Seuss Geisel Honor book, and one of the New York Times Ten Best Illustrated Books of the Year. She was a recipient of the 2010 Sendak Fellowship.

Antoinette got a BFA at the UCLA School of Fine Arts and then spent years in the world of design and advertising. She was a creative director, then a VP, at Disney before she took a flying leap to pursue her sixth-grade dream of writing and illustrating picture books.

Dreams she did not achieve: ballerina (who knew you had to be able to touch your toes?); astronomer (Math! Not a strong suit); and organic farmer (there’s still dirt and there’s still time.)

Antoinette lives in Southern California and reads and draws with kids in local school classrooms. She has been known to grow monster-sized zucchinis.

And this is what I wrote in Nick Jr. Family Magazine about Antoinette Portis’s debut picture book.

“Dedicated ‘to children everywhere sitting cardboard boxes’, this wonderful little book perfectly captures the amazing capacity of a child’s imagination to create endless possibilities out of a humble box. A super book that’s as close to perfection as a picture book can get!”
―Nick Jr. Magazine, 2007

A video of Antionette Portis Talking About Imagination