The ABC of It: Things to Think About: Dr. Suess 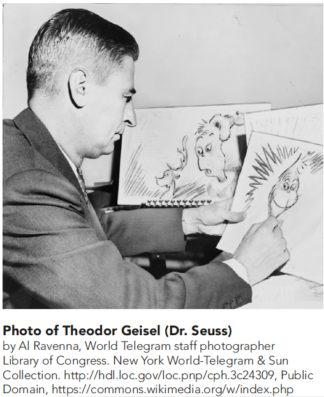 In the words of Leonard S. Marcus

“Theodor S. Geisel—known as Dr. Seuss to his legions of sticky-fingered young fans—was a favorite picturebook author when a former army buddy turned publishing executive approached him with a daunting challenge. Starting from a list of about 300 “sight words” that five- and six-year-olds could be counted on to recognize, Seuss was asked to conjure a text capable of transforming America’s youngsters into readers for life. 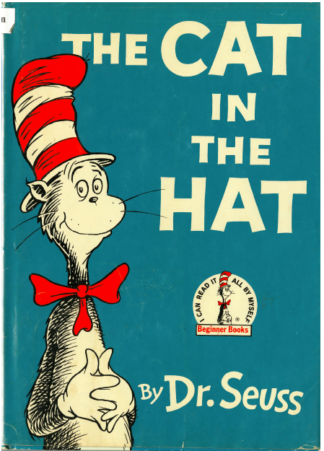 Cover of the book Cat in The Hat by Dr. Seuss

The public enthusiastically embraced The Cat in the Hat as a winsome riposte to Dick-and-Jane-style monotony. The book’s popularity spawned not only a sequel but also a new publishing company—Beginner Books—with Seuss at the helm, and with P. D. Eastman and the Berenstains soon lending their talents as key contributors.”

The Cat in the Hat is on display in The ABC of It: Why Children’s Books Matter.

Things to Think About 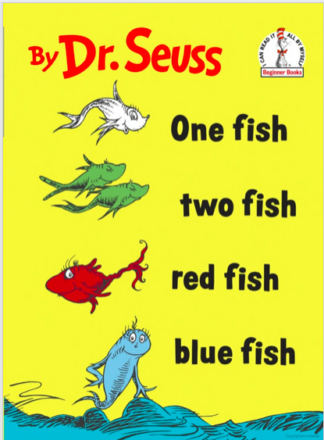 There is a moving National Public Radio Story Corps piece about Maria Rivas who emigrated from El Salvador to the United States twenty years ago. If her temporary protected status visa expires she will be forced to leave the U.S. without her U.S.-born daughter Emily, a high-school freshman.

On January 11, 2019 NPR posted the daughter’s interview with her forty-year-old mother.

“Emily asks her mother what it was like for Maria to come to the U.S. in 2000, three years before she was born.

“I didn’t know [English] besides ‘good morning’ and ‘what’s your name?’ when I came here,” Maria says. “When you were baby, I used to read to you the Dr. Seuss books, like One Fish, Two Fish, Red Fish, Blue Fish. And that’s how I learned English, reading to you.”

This is just one of the many stories like the ones that we have been hearing families share about Dr. Seuss and the early readers that he wrote. 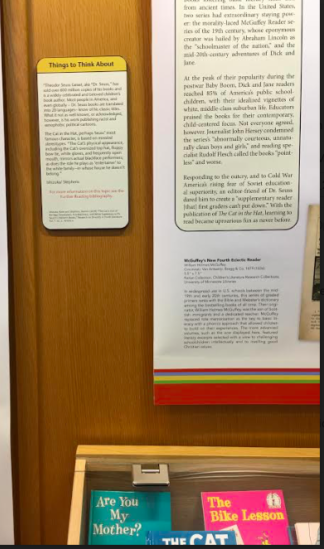 Things to Think About Sign and Display Case of Dr. Seuss Books in The ABC of It exhibit.

More To Think About

Interviewed for that episode were Katie Ishizuka and Ramón Stephens. They posit in their article, The Cat is Out of the Bag: Orientalism, Anti-Blackness and White Supremacy in Dr. Seuss that The Cat in the Hat, perhaps Seuss’ most famous character, was based on minstrel stereotypes.

“Theodor Seuss Geisel, aka “Dr. Seuss,” has sold over 600 million copies of his books and is  a widely celebrated and beloved children’s book author. Most people in America, and even globally–Dr. Seuss books are translated into 20 languages–know of his classic titles. What is not as well known, or acknowledged, however, is his work publishing xenophobic political cartoons.”

(Some of those editorial cartoons can be viewed here.)

“The Cat’s physical appearance including the Cat’s oversized top hat, floppy bow tie, white gloves and frequently open mouth, mirrors actual blackface performers; as does the role he plays as ‘entertainer’ to the white family–in whose house he doesn’t belong.”

Katie Ishizuka and Ramón Stephens will be at the Elmer L. Andersen Library to discuss their research and findings on May 10th, 2019.

The ABC of It: Whose Story is Being Told?

The ABC of It: Whose Story is Being Told?

The ABC of It: Why Children’s Books Matter is an exhibit at the Elmer L. Andersen Library at the University of Minnesota Twin Cities Campus.

for an in-depth discussion of how all people who interact with children and books can examine bias, social justice, and literature, historically and today.

This event was made possible by generous gift from Governor Elmer L. and Mrs. Eleanor Andersen in honor of former University Librarian Dr. Edward B. Stanford.

As we think about children’s books and their place in our lives, education and culture there are scholars and teachers who give us insight. (Readings that informed the exhibit here )

This bibliography is on display on the 3rd and 2nd floor of the Andersen Library as well as copies of the articles lists. A PDF of the list here

Ishizuka, Katie and Stephens*, Ramon (2019) “The Cat is Out of the Bag: Orientalism, Anti-BIaclaiess, and White Supremacy in Dr. Seuss’s Children’s Books,” Research on Diversity in Youth Literature: Vol. l: Iss. 2 , Article 4. Available at: https://sophia.stkate.edu/rdyl/voll/iss2/4