To Reserve Your Seat

For the Kerlan Award with Jon Scieszka go to

Jon Scieszka, (rhymes with Fresca) the first National Ambassador for Young People’s Literature and founder of the literacy initiative Guys Read, has sold more than 11 million books, including The Stinky Cheese Man and Other Fairly Stupid Tales, The True Story of the 3 Little Pigs, the Time Warp Trio series, Guys Read, Spaceheadz, Frankie Einstein, Battle Bunny with Mac Barnett, and the recently published AstroNuts Mission One.

Many readers know that I married my Penguin rep, the handsome, charming, well-read Mr. Paul Von Drasek. When we were first married we lived in Philadelphia. He got a lot of mail. Boxes and boxes, envelopes and jiffy packs. This was before the internet. This was before email. He worked from home when he wasn’t on the road. The only real requirement for house hunting was a porch to “catch the mail.” 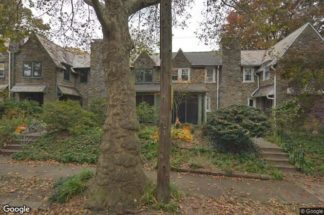 Ours was the row house behind the tree with the screened in porch. I was permitted to open the mail and read the galleys, the publicity, materials, the F&Gs as long as I put everything back how it came. (I did that mostly)

One weekday afternoon, I was sitting on the floor of the porch, working my way through the next season’s F&Gs (folded and gathered sheets that were the advances of picture books) when I came across The True Story of the 3 Pigs By A. Wolf. 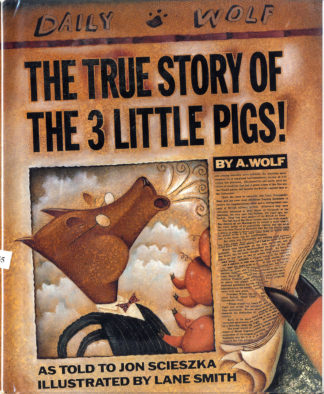 Then I jumped up, went a few doors down, grabbed the two kid neighbors and one of their friends, and dragged them back to my house. I read it aloud. They said, again! And again and again.

But don’t take my word for it. Read his picture books with Lane Smith, like The Math Curse and Stinky Cheese Man. (and read all of Lane Smith’s books while you are sitting in the public library surrounded by piles of picture books. Don’t miss Glasses Who Needs ’em. Great interview here)

Looking for great audio? Knuckleheads. Here’s a review of the book. I got in a lot of trouble for this review. Can you guess why? Here 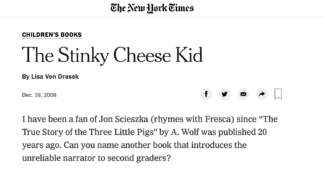 It’s no secret that I like to laugh. Given a choice between  a weeper and a funny book, I am going to reach for the funny one first.

Jon Scieszka’s books are kid bait. They are the gateway drug to independent choice reading. When I was a public librarian, my first action when a parent was dragging a kid in to “make them read” was to separate the two of them. Then I would pull off a copy of the Time Warp Trio. You know the story. Kid gets book for his birthday. Kid is sad and disappointed. Book turns out to be a magical object that whisks the kid and his pals back in time for many adventures. I would lie to the kid and say, I loved this book so much that I memorized it. (well actually just the first page) 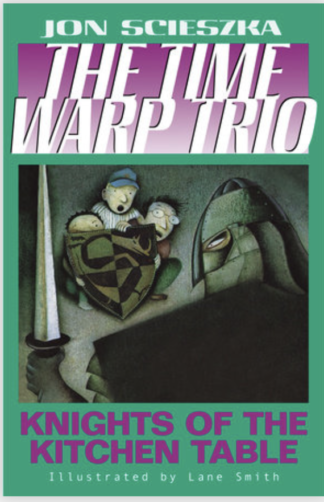 “Is he talking to us?” asked Fred? 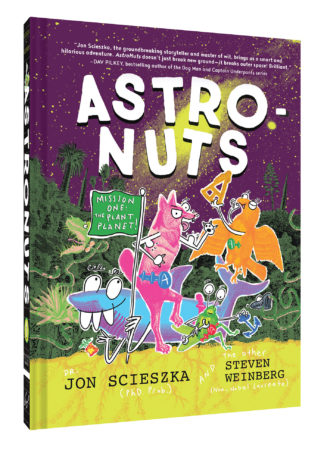 We invite you to attend the Kerlan Award

Jon Scieszka has had and continues to have a distinguished career in children’s books. He writes for kids, he promotes the work of other writers and he has generously donated his papers to Children’s Literature Research Collections for anyone to witness his creative process as well as those of his collaborators.

Jon Scieszka is an advocate for teachers, librarians, and for children. And he is coming to Minnesota. Reserve your seat now.

Thank you to the Kerlan Award Committee for all of their hard work.

What is the Kerlan Award?