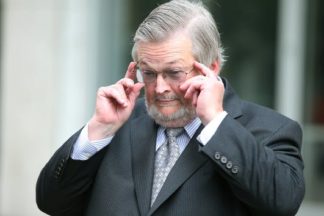 John Borger, was one of the nation’s preeminent first amendment lawyers, spending four decades before retiring from the Faegre Baker Daniels law firm in 2017, protecting the freedom of the press.  Star Tribune senior vice president and general counsel Randy Lebedoff called Borger “a brilliant First Amendment advocate who contributed greatly to our state and country by standing up for freedom of speech when it counted.” 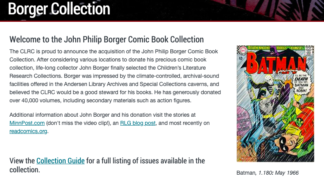 John Borger is known at the University of Minnesota to curators and librarians, faculty and students, scholars and researchers through his generous donation of his comic collections of over 40,000 volumes to the Children’s Literature Research Collections in the Archives and Special Collections department.  After considering various locations, Borger was impressed by the climate-controlled, best practice for preservation sound facilities offered in the Andersen Library caverns, and believed the CLRC would be a good steward for his books.

The Borger Collection of Comics has been used by independent scholars and historians, art students and art teachers, Minnesota College of Art and Design and University of Minnesota Art and Design students and instructors, popular culture and children’s and adult literature classes. Students interested in feminism, equity and diversity, social justice, freedom of information, graphic format, and comics all have held these materials in their hands.

Judy Borger, John’s wife wrote a moving piece in MinnPost about the thought process behind this $100,000 donation. John Borger added a sidebar

In His Own Words 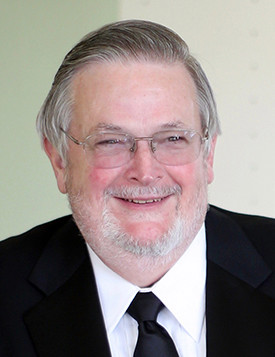 Why I read comic books

I read comics for the same reasons I read other kinds of books and watch movies: for relaxation, for amusement, and for inspiration. Iconic superheroes like Superman embody instinctive altruism, Truth and Justice as the ideal American way, and the principle that “with great power there must also come — great responsibility,” in the closing words of the first Spider-Man story. 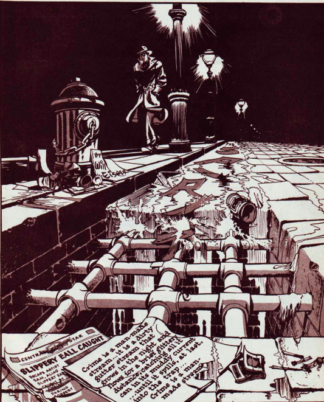 Will Eisner, The Spirit

Comics are more than superheroes in costumes. Will Eisner told compact human-interest stories with innovative art in The Spirit newspaper supplements in the 1940s. Eric Shanower is painstakingly telling the gods-free tale of the Trojan War in Age of Bronze. Sergio Aragones and Mark Evanier use a dimwitted barbarian to explore social issues in Groo. Ron Marz and Greg Land delved into high fantasy in Sojourn. Bill Willingham brings fairy tale characters into the modern world in Fables, with the Big Bad Wolf and Little Boy Blue battling an unexpectedly familiar adversary. Matt Wagner’s Mage put a contemporary spin on Arthurian legend in Mage. Terry Moore examined organized crime, love and death, and the search for happy-ever-after in Strangers in Paradise. I recommend them all, with age-appropriate caveats. 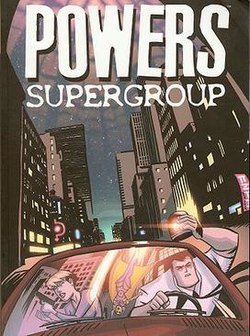 “The World’s Greatest Super-Heroes” by Paul Dini and Alex Ross collects outstanding self-contained stories that capture the essence of classic characters.
Some of the smaller, quiet stories have stuck with me the longest: the often-reprinted return to Batman’s roots in “To Kill a Legend” in Detective Comics #500 (March 1981) by Alan Brennert and Dick Giordano, and the determined heroism of Wally West in “Nobody Dies” in Flash #54 (Sept. 1991) by William Messner-Loebs, Greg Larocque, and Jose Marzan.

Thanks to the wonders of search engines, interested readers can find most of these stories, and more details about them, with relative ease.

If I had to pick a single book to recommend as an introduction to comics, though, it would be Watchmen. Alan Moore and Dave Gibbons’ complex epic deconstruction of superheroes, fascinated me in the 1980s and still resonated with my son’s high school and college friends in the last few years. I’m looking forward to the movie.

The Depth and Breadth of the Collection

Nick Fugate of the Andersen Library staff is one of the The John Philip Borger Comic Book Collection’s biggest fans. He has selected important holdings to highlight the depth and breadth of the collection. 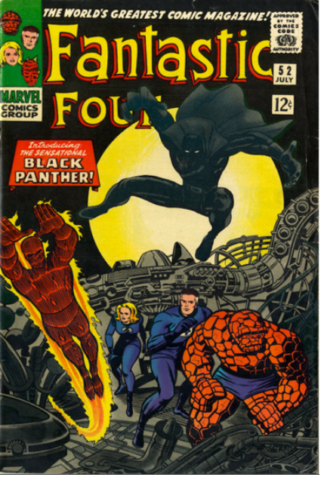 Fantastic Four.  This is the first appearance (July 1966) of the Black Panther who was the first superhero of African descent in mainstream comics predating other heroes such as Luke Cage (1972), Falcon (1969), Blade (1973), or John Stewart (who became the Green Lantern) from DC Comics (1971).

Incredible Hulk #181. This is the first full(he made a cameo appearance in the previous issue #180, which is also in the collection) appearance of the character Wolverine who is one of the most popular comic book characters of the last 50 years.

Batman Adventures #12.  From 1993 this is the first appearance in comic books of the character Harley Quinn who had previously appeared in the Batman: The Animated Series cartoon and has gone on to be one of the biggest characters in DC Comics including having her own film called Birds of Prey (and the Fantabulous Emancipation of One Harley Quinn) coming to theaters in February of 2020. 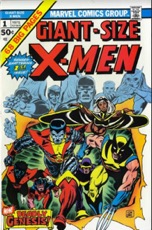 Giant Size X-Men #1. This is the issue that relaunched the X-Men with a new team and direction after their book (Uncanny X-Men) had been printing repeat stories for a long time. This launched the era of X-Men that would last through the rest of the 1970s and throughout the 1980s. 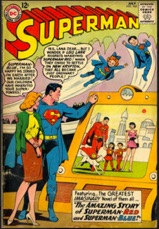 Superman #162. This issue features the classic Superman story “The Amazing Story of Superman-Red and Superman-Blue” in which Superman splits into two beings and one marries Lois Lane and the other marries Lana Lang. 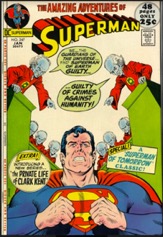 Superman #247. This issue features the classic story “Must There Be a Superman?” which is about questioning whether Superman is really needed and if he is actually helping humanity in what he does. 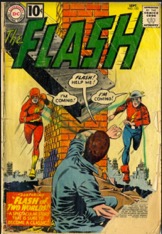 The Flash #123. This issue features the story “Flash of Two Worlds” in which the Silver Age Flash Barry Allen travels to an alternate Earth and meets the Flash of the Golden Age of comic books Jay Garrick and they join forces. This story would begin a series of many crossovers in the upcoming decades that brought together the characters of the 1930s/1940s (the Golden Age) with the characters of the current time period. 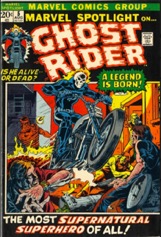 Marvel Spotlight #5. First appearance of the motorcycle riding character Ghost Rider. This would lead to a long solo series.

Superman’s Pal Jimmy Olsen #134. This issue features the first appearance of the villain Darkseid and features work from artist Jack Kirby as he worked on his Superman and New Gods epic at DC Comics after leaving Marvel comics.

Amazing Spider-Man #129. First appearance of the character The Punisher. The Punisher rose to prominence as an antihero who acts as judge, jury, and executioner of criminals which stands against the normal “no killing” ethos of most superheroes. 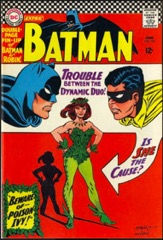 Batman #181. This is the first appearance of the villain Poison Ivy. She has become one of Batman’s biggest villains and has become a sort of eco-warrior anti-hero in recent years. Early on she was more a classic femme fatale villain for Batman and Robin to deal with. 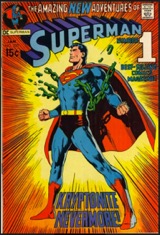 Superman #233. This is the beginning of a new era for Superman featuring star artist Curt Swan and writer Dennis O’Neil with a classic cover by artist Neal Adams. 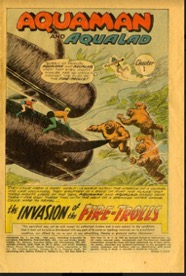 Aquaman #1. This is the first issue of the solo series for Aquaman which started after the launch of Justice League of America comic in 1960. 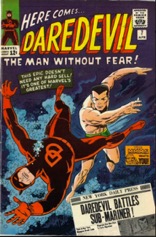 Daredevil #7. This is the first appearance of the black and red costume for Daredevil.

Who Uses the Borger Collection?

The University of Minnesota Archives and Special Collections are open access.

This means that anyone can make an appointment and request items in our collections to examine in our reading room in the Wallen Center. 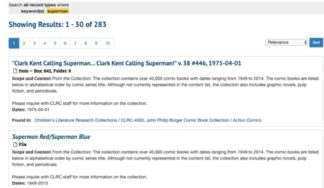 Plan your visit. Select the comics that are of interest and note the title, the box and the folder in your request. A visitor needs to be selective as the collection contains over 865 boxes and continues to grow as we continue to collect in this subject area.

Email the visit date(s) and selections to ASC-CLRC@umn.edu and we will email with a confirmation.

For more information go to https://www.lib.umn.edu/special/visit

The Unit is the Children’s Literature Research Collections.

Celebration of the Life of John Borger

Along with the Borger family andthe Archives and Special Collections of the University of Minnesota Libraries celebrates the life of John Borger, with a Celebration of Life.