Someone at work yesterday said, “Oh, you just love obituaries.”

My instinct was to deny that statement but as I gave it some thought, it is true. I do love obits. The obituary page is the one part of the daily newspaper that I always read.

I think this habit started after 9/11. Never had I known so many people who had died all at once. And then it was the friends and family of people that I knew.

And then truly, I love reading about people from all walks of life. And then I am fairly beside myself when the New York Times (the paper of record) neglects someone who I believe is truly deserving. “Attention must be paid!” (extra points to the house, if you know where that quote came from.”

Today the New York Times acknowledged the imbalance on the obituary page, neglecting women and others. They asked for nominations for the new Overlooked Obituaries page. 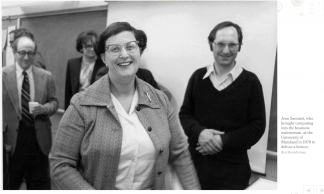 ean Sammet, who brought computing into the business mainstream, at the University of Maryland in 1979 to deliver a lecture. Credit Ben Shneiderman. New York Times, June 4, 2017

I immediately thought of Jean E. Sammet, an early software engineer and a designer of COBOL, a programming language that brought computing into the business mainstream, died on May 20, 2017. She was 89.

Her papers have been donated to the University Archives and Special Collection, in the Charles Babbage Institute Collections

Can you imagine how pleased I was that the New York Time did publish and obituary on Jean Sammet.

“Grace Hopper, a computer pioneer at Sperry Rand in the late 1950s, led the effort to bring computer makers together to collaborate on the new programming language. Ms. Hopper is often called the “mother of COBOL,” but she was not one of the six people, including Ms. Sammet, who designed the language — a fact Ms. Sammet rarely failed to point out. (Ms. Sammet worked for Sylvania Electric at the time.)

‘I yield to no one in my admiration for Grace,’ she said. ‘But she was not the mother, creator or developer of COBOL.’