What is the Children’s Theatre Company (CTC)?

The Children’s Theatre Company began as The Moppet Players, a small company which produced creative dramatics, dance, and theatre for children. In 1965, The Moppet Players moved into the Minneapolis Institute of Art and in 1975 was incorporated as Children’s Theatre Company. The Theatre’s reputation was built on a history of adapting classic children’s literature and storybooks, in addition to its extraordinary accomplishments in the areas of scenic and costume design.

For 50 years, CTC has created extraordinary theatre experiences that educate, challenge, and inspire young people and their communities. The first theatre for young people to win the Tony Award® for Outstanding Regional Theater, CTC has welcomed more than 11 million people and created over 200 new plays since 1965. CTC is recognized as North America’s flagship theatre for multigenerational audiences as well as a major cultural and artistic resource in Minnesota. 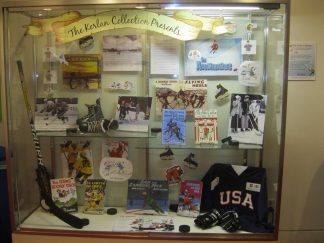 For over fifteen years, the Kerlan Friends select rare books, manuscripts, and art from the Archives and Special Collections of the University of Minnesota to create exhibits at the MCTC that support the play being presented. We draw materials not only from the Kerlan Collection of Children’s Literature but also the MCTC Collection in the Performing Arts Archives. 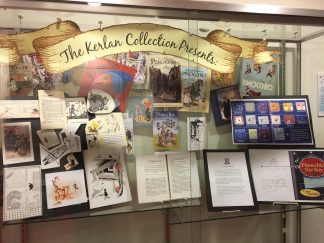 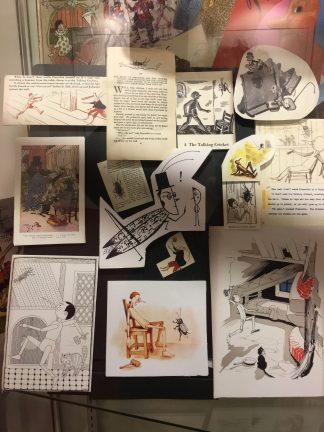 A selections of images from a variety of Pinocchio retellings all depicting when he speaks to the cricket, his conscience.

Some of the past exhibits were for performances of The Sneetches, Diary of a Wimpy Kid, Cinderella, Elephant and Piggie, Pinnochio, A Year With Frog and Toad, and the original musical production of The Abominables.

The present exhibit is for How the Grinch Stole Christmas. 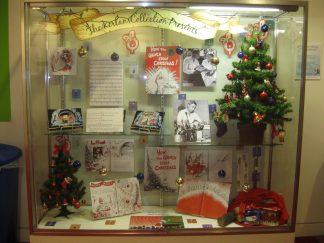 Notice in the case on the upper left is a selection from the score. The manuscript reproduction shows the characters’ dialog. There are also examples of previous Minneapolis Children’s Theatre Company sets from the 1990s from the Performing Arts Archive. The photographs of Theodore Geisel (Dr. Seuss) are from the Kerlan Collection.

Mary Schultz, Kerlan Friends President stated that “These cases are a unique opportunity to see materials that no one would find on the internet.”

“I would be remiss if I didn’t note that the cases hold high-quality reproductions as the originals must remain safe in the Elmer L. Andersen Cavern.”