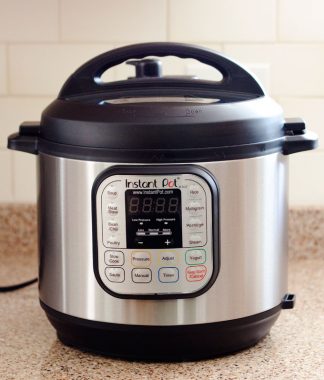 The  Star Tribune profiled two selection librarians of the Hennepin County Libraries, Susan Carr and Chelsea Couillard-Smith. They shared that the leading titles in demand this year were Instant Pot Cookbooks.

‘Demand is insatiable,’ she said.'”

Their catalog shows 31 titles with multiple copies each and hundreds of holds.

For the uninformed, the Instant Pot is a kitchen gadget that is an electric pressure cooker, a slow cooker, and a rice cooker.

For me the attraction was that healthy flavorful meals could be made in under an hour with very little planning and attention. It was Melissa Clarke’s article in the New York Times that planted the seed, many FaceBook Pages like Instant Pot Community  and Instant Pot Zebras as well as numerous blogs that convinced me to take the plunge. Actually it sat in the box for two months while I read cookbooks and recipe blogs. 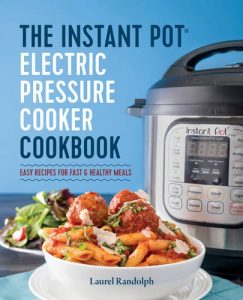 I bought the number one selling title The Instant Pot Electric Pressure Cooker Cookbook:Easy Recipes for Fast & Healthy Meals. The “One-Pot Beans, Sausage, and Greens” (page 120) was the first dish I tried after the recommended test run. It was fast, flavorful, and there were left overs for lunch during the week. Then I  made the “Apple and Cinnamon Oatmeal” (page 22) This was great because I didn’t have to stand at the stove stirring the oats for twenty minutes. I didn’t love the cooked apple. Since then I have made numerous batches of steel-cut oats. I had adapted The Steel-Cut Oats from Melissa Clarke’s (page 27) a few of the recipes to my own taste. I like my oatmeal well cooked but on the dry side. So for me the proportions that work are one cup of oats to two cups of water, 10 minutes high pressure, 10 minutes natural release, then quick release. I double the recipe and portion 1/2 cup servings and freeze the portions for weekday breakfasts. I add 1/4 cup of milk, 1/4 cup of toasted walnuts, 1/4 cup of dried cherries, and a tablespoon of maple syrup after I microwave the frozen oatmeal for 2 minutes. 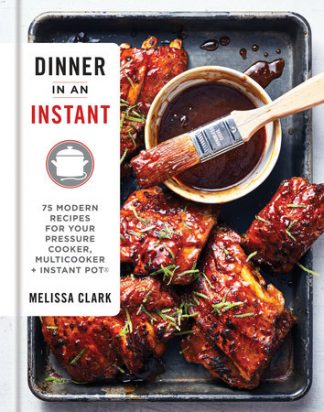 Since it was Melissa Clarke who talked me into buying the Instant Pot, I purchased Dinner in an Instant:75 Modern Recipes for Your Pressure Cooker, Multicooker & Instant Pot (TM) (Potter) This has become my go-to. I have made the best hard-boiled eggs (page 25)  the oats (page27) “Classic Beef & Bean Chili” (page 38)” Butter Braised Yukon Gold Potatoes” (page 139) “Mashed Potatoes with Sour Cream and Chives” (page 135) “Split Pea Soup” (page 119), “Bone Broth”  (Page 114) and my favorite is “Moroccan Chickpeas and Kale” (page 103) The flavors are bright. It is filling and reheats well. I had never cooked with preserved lemons and I fell in love. I have made this three times already and each time it so good. The only recipe that I wouldn’t do again is the chili as it seemed making it on the stovetop is just as long and good. I would use the Instant Pot just to make the beans. 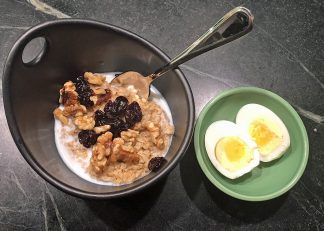 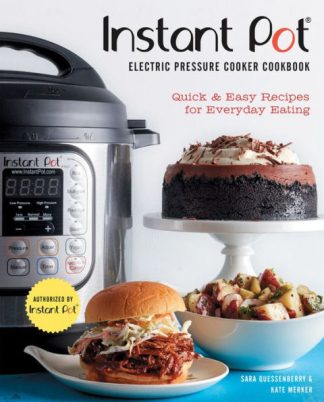 I was browsing at the Arcadia Bookstore in Spring Green, Wisconsin and came across Instant Pot Electric Pressure Cooker Cookbook: Quick and Easy Recipes for Everyday Eating. There was a “Chicken Marbella” recipe that reminded me of the classic Silver Palate Cookbook one that I had never made but had eaten at dinner parties. I am looking forward to trying it.