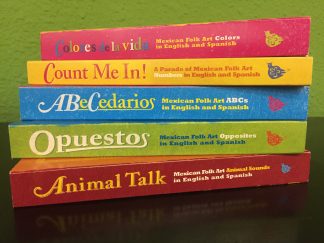 I couldn’t highlight one of my favorite board book series in Tuesday’s post.

A short blurb wouldn’t do them justice, therefore here is a post of their own.

These five titles published by Cincos Puntos Press comprise a bilingual series of early childhood concepts illustrated with photographs of pieces of Mexican folk art. Each book features different kinds of alebrijes―brightly colored Mexican folk art sculptures of wood, clay and paper mache. The figures depict magically real animals and people created by some of the greatest folk artisans in the world. And each book teaches a different concept for very young learners―ABCs, opposites, colors, counting and animals talking—in English and Spanish. 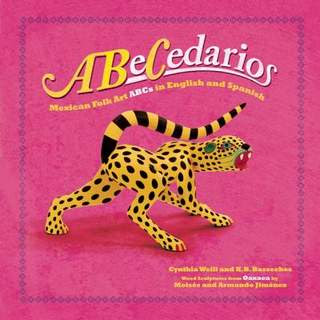 ABeCedarios, ABCs in Spanish and English Hand-painted animals by Moisés and Armando Jiménez 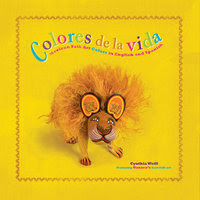 Colores de la Vida, Colors in Spanish and English , Illustrated by a variety of a rtists from the mountains of Oaxaca 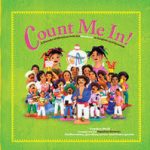 Count Me In, Numbers in Spanish and English, Clay figures created and hand-painted by the Aguilar Sisters 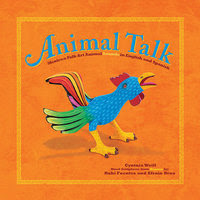 Opuestos / Opposites in Spanish and English , Hand-carved and painted animals by Martin and Santiago Quirino 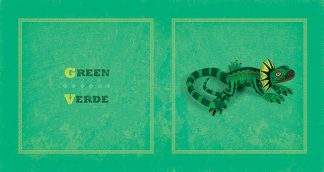 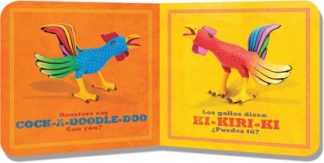 An insightful review of this series by Beverly Slapin. Beverly Slapin is a long-time education activist and lifelong learner. As co-founder and former executive director of Oyate, Beverly co-edited Through Indian Eyes: The Native Experience in Books for Children, and A Broken Flute: The Native Experience in Books for Children. on De Colores Reviews  “Bilingual, colorful, inviting, absolutely adorable—and definitely child-centric—these libritos will capture and hold the attention of the littlest to the biggest kids (and adults alike—I keep coming back to them, and I’m known to be hard to please). All are highly recommended.”

Slapin also notes, “I want to share with readers some information about how this project’s collaborative plan becomes a reality. Cynthia Weill and the artists work together for between two and four years to produce each book. (Cynthia mentioned to me that her role often includes babysitting so that the artist families can concentrate on their craft.) She pays the artists market rate for their work, which she then donates to the Field Museum of Chicago. After each book has been produced, Cinco Puntos Press gives each artist family 100 copies of the book that features their work.” 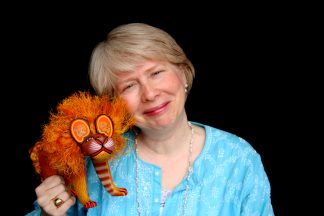 Cynthia Weill received her PhD from the Teachers College of Columbia University. She is trained as an art historian and has worked as both an educator and art historian. She works with folk artists from around the world to illustrate basic concepts for children.

A Little About the art 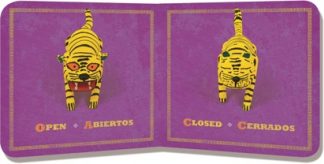 The figures in Opuestos are made in La Union Tejalapam, a Oaxacan village that lies in a valley between the mountains of the Sierra Norte. Martin Santiago, a farmer, began carving in the late 1960s. Soon after, his brother Quirino followed him into the trade to supplement his income as well.

The figures are made from the wood of the flowering jacaranda tree. After carving the pieces are painted with natural aniline dyes. Making the pieces requires enormous skill as the artisans work with machetes on small pieces of wood. Quirino and Martin take their inspiration from the world around them. They observe their own livestock such as goats and cows; domestic animals such as cats and dogs and the wild animals they sometimes see such as deer and lynx.

Quirino and Martin carved most of the figures in Opuestos; their brother Placido and his sons Calixto and Eloy, nephew Maximino Santiago, their cousin Julio Jimenez, and Martin’s son Jaime also contributed work for the book.