based on the classic books by Sydney Taylor 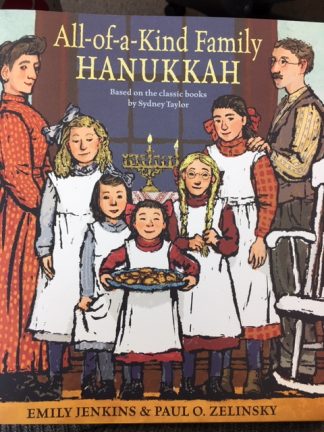 First things first. Yes, this is based on the classic books by Sydney Taylor, but it does stand alone. On the other hand, don’t miss the originals. Begin with All-of-a Kind Family.

Recap: Early chapter book that depict the daily life of a Jewish family with 5 sisters set in the early 1900s that live on the lower Eastside of New York City.

To say these books were much beloved wouldn’t be an exaggeration.

Included in The ABC of It : Why Children’s Books Matter, 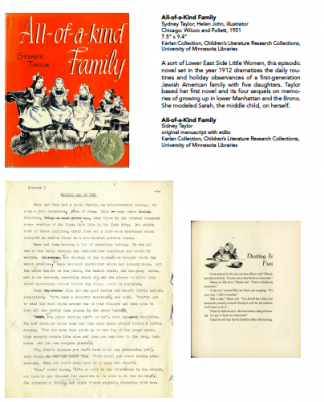 Page from the ABC of It: Why Children’s Books Matter

“A sort of Lower East Side Little Women, this episodic, novel set in the year 1912 dramatizes the daily routines, and holiday observances of a first-generation, Jewish American family with five daughters. Taylor based her first novel and its four sequels on memories of growing up in lower Manhattan and the Bronx. She modeled Sarah, the middle child, on herself.” Leonard Marcus, The ABC of It.

Back to the Book

Every once in a while there is a book that you want to press into everyone’s hands. This is it.

Emily Jenkins recreates this family in spare language that echoes the original, picture-book pacing and rhythms. The storytelling voice, the narration is pitch-perfect capturing the time and place. Yiddish culture is evident in words like latkes (potato pancakes) and schmaltz (the chicken fat that they are fried in) as well as the cadence.

Jenkins recreates the family relationships of the sisters, the plot turning on Gertie, the youngest, a four-year-old, wants to help but is too young to peel potatoes and chop onions. 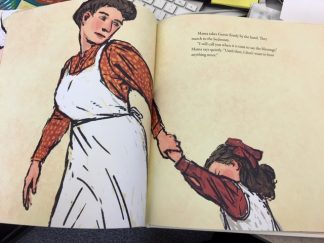 When Gertie throws a tantrum,

Mama takes Gertie firmly by the hand. They march to the bedroom.

“I will call you when is is time to say the blessing,” Mama says quietly,

“Until then, I don’t want to hear anything more.”

I immediately was drawn to the depiction of the family. I thought that Zelinsky shown them exactly how I remembered them. That he drew from MY memory. Although there were pictures in the original, they were line drawings. I went back to the archive. No, I hadn’t read the the first edition as a child. It was this one. 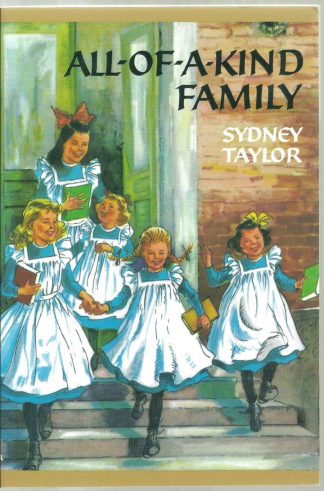 All of Kind Family Cover

And it is not just that Zelinsky triggered my memory, it was as if he re-booted the series in a new way while paying homage to the original intent of the author.

The generous size of the picture-book format, gives readers and listeners a window in the time period. Zelinsky pans the roof tops on the title page, with a view of the tenements, the East River, and the Brooklyn Bridge in the distance. With a few digital brushstrokes, we are on the crowded cobblestone city street, details of hats, curbsides, wagon wheels and kerchiefs visible but not fussy or intrusive. We see his historic research on the page but are not overwhelmed by it. My favorite spread is the cutaway view of the whole apartment. As a young reader, I don’t think I imagined 7 people living in two rooms.

My first apartment in New York City was a 5th floor walk-up on 1st Avenue. Zelinsky nailed the coming home, when Sarah and Gertie arrive home and face the long flight of stairs. This is the art of the picture book– the pictures tell more than the words.

When we move indoors, I practically jumped up-and-down. My heart sang as the I was reintroduced to the girls. “Ella is twelve. Henny is ten. Sarah is eight Charlotte is six. Gertie, who is four, thinks it is nice being all girls–“all of a kind,” Papa and Mama liked to say. 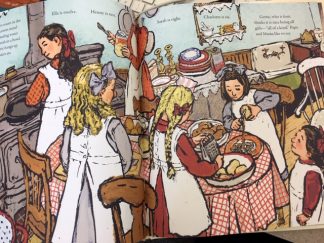 This is just a taste

But don’t forget to take off the cover. Underneath is a lovely surprise. Recall that Sarah with the braids is thought to be Sydney Taylor, is an extra delight. 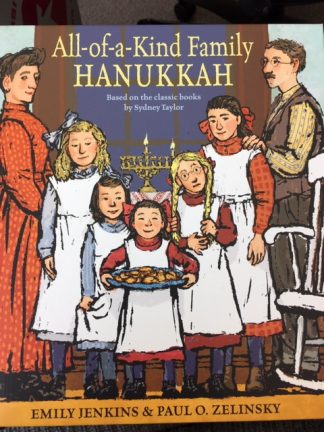 Under the cover. Case image.

Oh and if you want to make latkes

Thinking about the phrase “All-of-a-Kind Family” without going back to the original, I recall that there was a negative connotation to having a family of all girls and no boys. As if girls weren’t good enough, that Papa was defending that they were. Of course, those were the times and great jumping off for a discussion. Remember women didn’t get the right to vote until 1920.